The second International Arbitration Conference will be held in Doha on 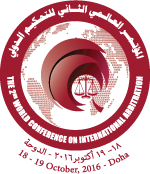 The conference is being organised by Qatar International Centre for Conciliation and Arbitration (QICCA) at Qatar Chamber (QC) in collaboration with the Ministry of Justice (MoJ).

Speaking to reporters at the QC headquarters today, QICCA board member Sheikh Thani bin Ali bin Saud al-Thani said the conference would coincide with the celebration of QICCA’s 10th anniversary, and is to be held under the patronage of HE the Prime Minister and Minister of Interior Sheikh Abdullah bin Nasser bin Khalifa al-Thani.

The second edition of the international conference aims to enhance the exchange of experiences and good practices in the field among global and regional experts who will take part in the event. Besides, it will be a good opportunity to promote the use of commercial arbitration as a practical means to settle disputes outside of the court, in an attempt to speed up the process and help businesses avoid the troubles and costs involved.

Sheikh Thani said the conference would focus on six main subjects: a review of the Qatari arbitration texts and related court rulings, the role of GCC arbitration centres in developing an investment-friendly environment, modern trends in arbitration, updating Qatari legislation to create an attractive ground for investments, integration between Qatari laws and international treaties to protect the rights of Qatari investors abroad and the role of the national judiciary in supporting and controlling commercial arbitration and implementation of the arbitrators’ rulings.

He said the centres managed to resolve around 80% of the disputes reviewed, collectively valued at over QR1bn.

Salem Rashid al-Muraikhi, director of the real estate registration department and lawyers’ affairs department at the MoJ, said the ministry would actively participate in the conference, which would in turn play an important role in developing Qatari legal talent to practise commercial arbitration. He also extended full support of the MoJ to commercial arbitration as a legal tool that helps ease the load on local courts.

He added that the arbitration law is expected to be issued soon.
Saleh Hamad al-Sharqi, QC general manger, stressed that the QICCA has achieved a great deal since its inception in 2006. It has enhanced the concept of arbitration within the Qatari business sector, enabling many businesses to avoid losses that may result from lengthy procedures in courts in case of litigation.

The first edition of the conference was held in Doha in 2008, with the participation of the heads of commercial arbitration centres around the world.